We are currently scheduling patients for all medical and routine eye care needs. We are being careful to follow the appropriate CDC recommendations and guidelines to keep our patients, staff, and community safe. If you plan to visit our office, please give us a call at 419-629-3241! Thank you! 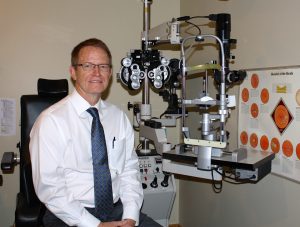 Dr. Knapke is a native of Minster, Ohio. He attended The Ohio State University where he received a Bachelor of Science in Physiological Optics in 1981 and Doctor of Optometry in 1982. He worked in private practice in Springfield until 1985 when he and his wife, Norma, moved back to the area and started New Bremen EyeCare. The practice was originally opened at the current location of the New Bremen Coffee Company on Monroe Street. In 1993, they moved the practice to its current location on Washington Street.

Dr. Knapke lives in New Bremen with his wife, Norma. They have three children, Mark, David, and Elizabeth, and six grandchildren. He is active in church choirs and other choral groups. He enjoys reading and spending time with family.

You can schedule your next appointment with us online!